The Summer of the Cicadas 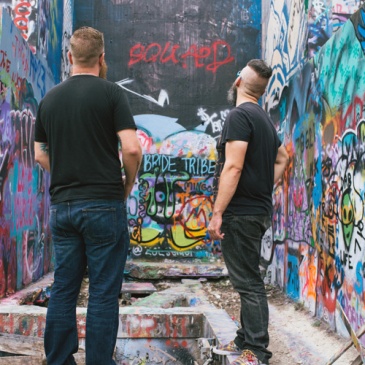 Periodical cicadas spend most of their lives underground feeding on xylem fluids from the roots of deciduous forest trees in the eastern United States. After 13 or 17 years, mature cicada nymphs emerge at any given locality, synchronously and in tremendous numbers.

Royal Ruckus has been underground for many years, many unaware of their continued existence. Chunjay and Flatline have each been very busy though, learning and growing in this life, always becoming.

Cicadas are among the greatest ruckus-making insects known to man, and a swarm of them can produce sounds up to 120 decibels. That’s louder than a rock concert, and comparable to the noise from a chainsaw. Cicadas gravitate to other ruckusy summer objects, like lawnmowers, because female cicadas confusedly mistake them for singing males, and male cicadas will follow in order to continue wooing the females.

Ruckus (noun, ruck·us [rəkəs]) is a disturbance or commotion. A “royal ruckus” is a large-scale commotion, fuss, or noise. This description characterizes the musical accomplishments of the duo, Chunjay and Flatline.

Despite such a prolonged developmental phase, adult cicadas are active for only a short time. The males aggregate into chorus centers and attract females to mate with. Within two months of the original emergence, the life-cycle is complete, new eggs have been laid, and the adult cicadas are gone for another 13 or 17 years.

The Summer of the Cicadas is a two-part eclectic hip-hop project by Royal Ruckus and friends that was released in 2017.

Royal Ruckus is like the cicada; they have been underground for many years, not to be heard from or seen. They have since emerged from the ground to sing and make a ruckus, and before you know it, will cease their singing and return to the ground. Read more about cicadas here…

The Summer of the Cicadas is a two-part concept album by Mike and Jamey of Royal Ruckus, built around a metaphor of periodical cicadas.

The Summer of the Cicadas
Flatline and Chunjay: Act I—The Life Cycle of Periodical Cicadas
Chunjay and Friends: Act II—Rebirth: The Lone Gunmen

Listen to the new album! Bandcamp | iTunes | Spotify | Amazon | GooglePlay | Get the CD